From March 22 to March 26 PhD-student Marco Hostettler from the University of Bern joined the research group of Erika Weiberg from Uppsala University (Current Project: Climate and ancient societies in Bronze Age Peloponnese, CASE, https://www.arkeologi.uu.se/Research/Projects/climate-and-ancient-societies-en/case-project-description/) for fieldwork in the North-eastern Peloponnese. Marco Hostettler will collaborate with Erika Weiberg at Uppsala University for one year in the framework of an UniBE Doc.Mobility grant.

The field campaign aimed at collecting stalagmites for Holocene climate reconstructions. In caves, stalagmites form when saturated drip water falls from the ceiling onto the cave floor. During this very slow accumulation process stable oxygen and carbon isotopes are trapped in the forming calcite layers, storing information on past climate and climate change. The fieldwork was carried out by a team consisting of the leader of the paleoclimate component of CASE Martin Finné, Uppsala University, Marco Hostettler, University of Bern, Chryssa Contaxi from the Ephorate of Palaeoanthropology and Speleology, and Dimitris Karoutis.

Stymphalia cave is located in an isolated hill directly northeast of the eponymous lake. The cave was discovered during road works and has been subject to efforts to create an artificial entrance. The partially collapsed cave gives access to at least one decorated chamber with stalagmites standing alone and in clusters.

Xeropigado cave is located on an east-facing slope dipping into the Argolic Gulf (fig. 2). The vertical entrance to the cave is located at the side of the coastal road and leads into a very wide chamber. The cave shows recent dripping and is richly decorated with speleothems.

Several stalagmites have been sampled in both caves for further examination (fig. 3). Next steps include the preparation of the stalagmites for initial sampling and preliminary dating using the uranium-thorium method. If the Holocene is covered by the retrieved samples, high-resolution sampling for stable oxygen and carbon isotopes analyses for climate reconstruction will be performed.

Fig. 1: The isolated hill at the northern shore of lake Stymphalia. The entrance to the cave is located in the centre of the figure directly besides the road. (Image: Marco Hostettler/EXPLO)

Fig. 2: View of the Argolic Gulf from south-west as seen from the location of Xeropigado cave. (Image: Marco Hostettler/EXPLO) 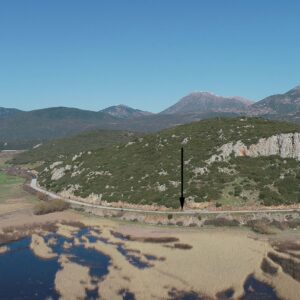 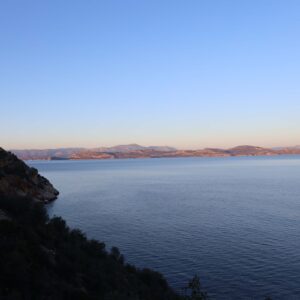 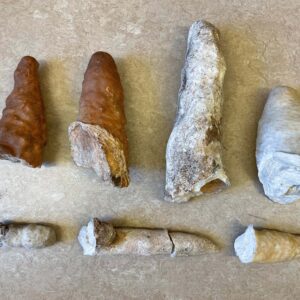