Update on cores from Lin 3, Albania

Recording and analysis is progressing well for likely Middle Neolithic (late 6th–5th millennium BC) organic layers from Lin, Lake Ohrid, Albania. This work is being led by Dr Rachel Ballantyne, Prof Amy Bogaard and Prof Mike Charles at the University of Oxford.

A network of cores was collected in 2020 by our colleagues at the Universities of Bern and Tirana (Coring campaign at Lin, Albania). The cores contain waterlain sediments in a now dryland area on the western shore of Lake Ohrid. Underwater remains on the lakebed were recorded and sampled in 2021 and include wooden posts, pottery sherds and stone artifacts. A grid of sediment samples from the underwater sondage is also being analysed in Oxford for bioarchaeolgical remains, with a particular focus on plants.

Each core is 3–5m in depth and dominated by lake silts and marls from throughout the Holocene (post-glacial period). The Middle Neolithic settlement is represented by a very dark, peaty layer dominated by wood fragments, charcoal, and the waterlogged remains of food plants such as fruit stones, nutshell, oil seeds and cereals.

Detailed sediment descriptions and high-resolution photography provide the baseline record for each core. We have benefited from the skills of photographer Ian R Cartwright at the School of Archaeology, University of Oxford (two of whose images are reproduced below). The cores are then subsampled in vertical sequences for plant remains and pollen, which will support chronological reconstructions of human diet, subsistence practices and environment. Targeted radiocarbon dating of plant remains will establish the likely duration of the Lin 3 organic deposit, to complement dendrochronological (tree-ring) dating of the associated wooden posts. 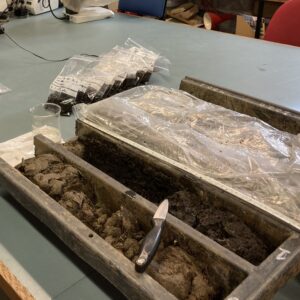 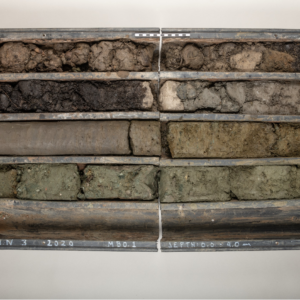 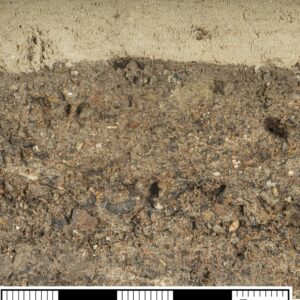